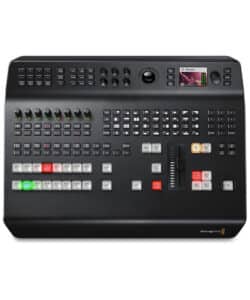 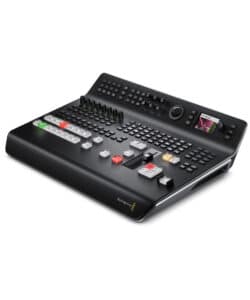 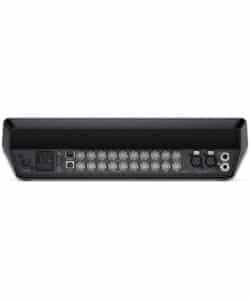 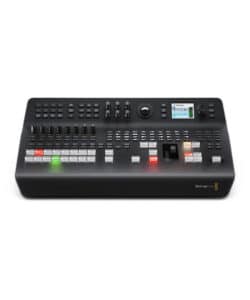 1 in stock (can be backordered)

The Blackmagic Design ATEM Television Studio Pro 4K is a UHD 4K-compatible, 8-input live production switcher with an integrated control panel, suitable for broadcast, sports, web, and A/V productions. This versatile switcher’s eight independent 12G-SDI inputs accept all popular HD and UHD signals up to 2160p60. A re-syncing feature on each input enables you to seamlessly use an amalgam of pro and consumer cameras, game consoles, and computer feeds.

Multiview output is available for all eight channels, via HDMI or SDI, complete with tally, labeling, audio metering, and safe-area marking. A talkback function is available for director/operator communication with compatible cameras. The integrated Fairlight audio mixer features six-band parametric EQ, compression, limiting, and stereo simulation on analog and mic inputs. Mix solely from the panel, or use the multitrack interface on your Mac or Windows PC. Use the auxiliary output port to send your switched program or clean feed to a large-scale screen or other display.

Layer live video over other video sources or graphics with the Upstream Keyer. You can use luma key, linear key, pattern key, or shoot against a green screen and use chroma key to instantly composite the video over virtual sets.

The ATEM Television Studio Pro 4K includes two downstream keyers, so you can add high-quality graphics like logos, bugs, and titles from the built-in media players over the live “on air” program output. Downstream keyers are the last layers of keying, so they overlay all video switched to the main program output.

To automate complex sequences of precisely timed actions on your ATEM switcher, you can now create powerful shortcuts called macros. Record a sequence of transitions between video sources, including key effects, audio mixer adjustments, camera control settings, and more using the ATEM software or hardware control panel. Macros are saved as XML files that can be edited with a standard text editor, so you can combine them together to build sophisticated sequences that would be impossible to execute manually during a live production. That means you can create unique looks that can be recalled instantly, copied between switchers, and used repeatedly when you require them.

The built-in audio mixer lets you control camera and external audio with precision level and balance adjustments on all 10 available channels. You can enable or disable channels, or activate audio-follow-video (AFV) mode instantly. Adjust the mixer via the ATEM Control Software, or plug in an external Mackie standard USB fader panel.

Multiview allows you to see your sources, graphics, preview, and program outputs on a single screen so you don’t need separate monitors for your individual cameras. You get HDMI and SDI multiview outputs so you can connect professional broadcast SDI monitors, computer monitors, or even consumer HDTV sets.

Eliminate external character generators by storing up to 20 broadcast quality RGBA graphic files in the media pool. The two media players appear as input sources to your switcher. You can transition to graphics as full-frame video, or feed them to the keyers for overlaying video. Popular image formats such as PNG, TGA, BMP, GIF, JPEG, and TIFF are supported.

The bright LCD screen built into the ATEM Television Studio Pro 4K lets you monitor program and audio levels, as well as view menus for adjusting switcher settings. The spin knob control, menu and set buttons work together with the LCD to give you fast access to all switcher settings.

A physical transition slider provides tactile control of a transition, for moments when a manual slider is preferable to a preprogramed transition. 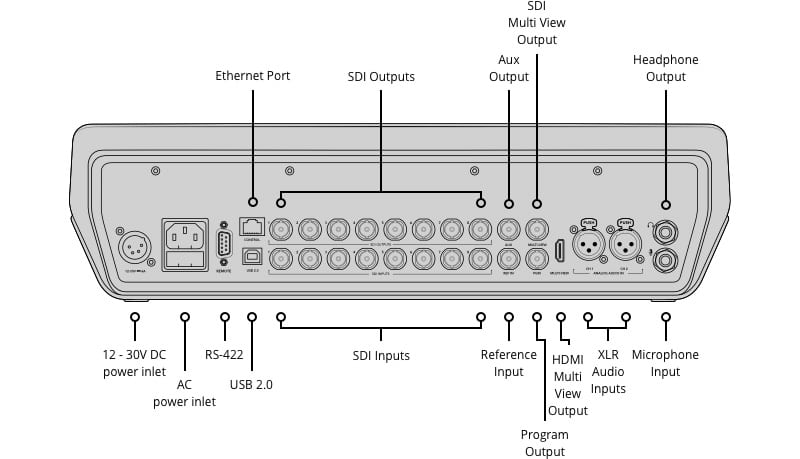 Channels: Fill and Key for Each Media Player